My Wild Ride in Paris

When I got off the train in Paris and found the taxis, there was a huge long line.  As is common in many places like that there was a guy who came up to me asking if I wanted a taxi. I was not sure about some random guy offering his services and he told me that he had a motorcycle taxi.   I said, “No way, you can get all my stuff on a motorcycle?”  He said yes. I still was not sure but after talking about it for a while, I agreed. So we went to his big motorcycle – I don’t know motorcycles but it was like one of those big Hondas with the carrying cases on the sides, etc. 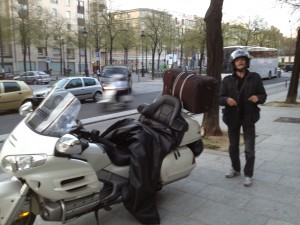 After, a few tries moving things around, he did indeed get everything on the bike. I was really glad I went for it. Being a warm night it was very fun cruising thought the streets on this bike.