Friday, 26-April-2013
Today we took a big long bus trip from Morteau in the northeast of France to the Toulouse in the south. In all it took about 9 hours of diving time but it didn’t seem that long. We left the hotel at 7:00 am and at 11:00 we arrived at the very neat little town of Charroux, almost exactly in the center of France. This town probably has an interesting history that I don’t know about but it was built in a circle and the houses are old streets narrow. 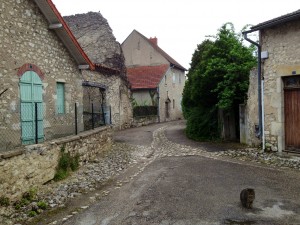 A small street in the town. Check out the cat in the front right – just hanging out.

There were two attractions in the town in addition to being a good stopping/rest point about half way in our journey; there was a private collection of tower clocks and a very nice restaurant, neither of which could handle a group our size. So we split the group in two and while one group ate lunch the other looked at tower clocks. And then we switched. It all worked out very nice. 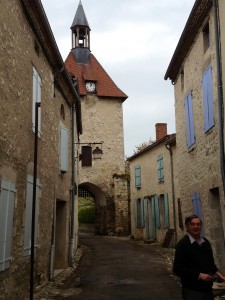 Here’s the town clock tower and the guy that collected all the clocks.

The lunch was very nice, again (I will have to try to write a post on that) and the clocks were also amazing. Out in the middle of nowhere this guy had been collecting clocks. He had a whole three story house full of them and most of the were working. In addition to tower clocks, he also had some Comtoise clocks that were very nice. He had done a really nice job displaying all of these in addition to the large dials in some cases. I’ll put some photos and movies into another post so you can get a feel for how amazing this house of clocks is. 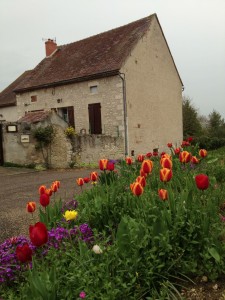 Don’t you just love this. Lots of spring flowers around this time of year making everything very special.

Time to get back on the bus,