Wednesday, 24-Apr-2013
Today we were in Besancon a smallish town located in eastern France near the Swiss border. It is uniquely situated almost entirely within a loop of the Daubs river. It’s recorded history goes way back to as far as 58 BC and the days of Julius Caesar. Despite its ancient roots, it is today a very “happening” city of over 100,000 people well known for its microtechnology capability as well as its art. The city is the center of the French watchmaking industry.

This opening we went to the city Time Museum. Tis is a new museum in a very old building. The outside is really old but the inside had been renovated with a contemporary style that was very tasteful and maintained some of the old. They had a foucault clock mounted highs a tower that provided some neat Ives of the city. Watch this movie of a Foucault clock.

Then, also at the museum we saw what was declared to be the most complicated watch in the world. I won’t attempt to go into that except to,say that it tells you a lot of things – probably many of which you don’t really want to know, or need to know. It is just the wonder of the skill it took for a 17th cent craftsman to make it. 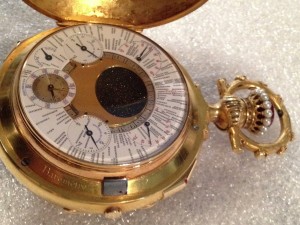 Then we went to the cathedral to see one of the most complicated clocks in the world. It has about 37 dials on it and 20 animated pictures on the sides. It also has automatons or moving figures at certain times. My iPhone ran out of space right when I was getting a movie of the figures moving so, sorry, you will miss that, but I did get a movie of lots of wheels and things turning that I think is pretty cool. The clock is about 20 feet tall and in a really small room, so it was very hard to get a good picture.

This picture makes the clock look bent over but that is because I had to use the panorama function and it distorts things.

Then we took a hike up to the citadel for some of the most spectacular views you could ever see! This is the classic walled medieval city.

That’s all I have time for tonight.