West Dean College – a place for me

It has been a month since I posted last and it is hard to believe that it has been so long.  On the other hand, so much has happened in that time.  In short, we finally got approval for Debbie to come and stay here for the duration of my studies (in fact she can stay much longer).  And, my studies have started. 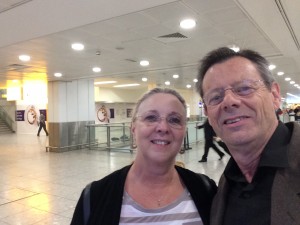 Heathrow airport – If we look a bit dazed it is because it is 6:00 AM

We labored and waited so long, it seems, to get Debbie’s Certificate of Entitlement approved but it finally came through and we got her on a plane and over here ASAP.  It was not without drama but within a few days she was landing at Heathrow airport in London.  By contrast, her trip through the immigration and customs lines at the airport were super fast, she walked straight through with little interruption. I had gone to get some coffee thinking that I would have a bit of a wait but no sooner was I back to my watching spot and she came through the doors!  It was amazing.

We only had a two days together before my classes started, in fact the day after she arrived was registration day and that day after that I started my first day.  So, for the past two weeks, Debbie has been busy making our new flat a home and I have been getting into my classes. 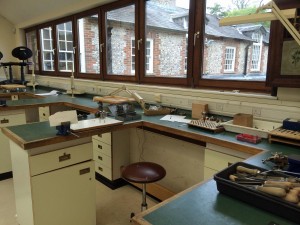 Along with a number of introductory classes on things like learning how to use the library we also got started with initial projects in the workshop.  I brought some tools with me also, so I have spent some time getting them setup. My first project has been making a file cleaner.  Doesn’t sound too exciting does it.  But it is a very good project to learn the skill of using a file.   I’ll write something about this later separately so that those of you that will really find it boring won’t have to waste your time on it. 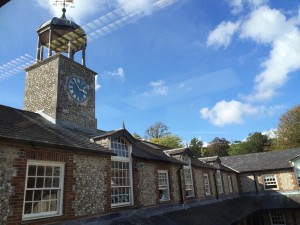 View from the window by my workbench.

I have been riding my bike to school and back, about 5.5 miles one way.  Believe it or not, today is the first time I have ridden through any rain.  A couple days I have put on my rain pants expecting to get wet on the way but no rain appeared.

The weather here is so variable and changeable in the matter of minutes.  Look for some more writing on the ride to and fro but for now, two big impressions from riding – the beauty of the ride and the soreness of my legs.  My ride is mostly off road but on a paved path but at least half of it is on a walkway by fields and pastures.  Last Friday, I was so impressed by the morning and the sheep in the pasture that I had to stop for a photo.

Got to stop for now –