The cutest place ever! (Best lunch too!)

Thursday, 25-April-2013
If it seems like I am going backwards in time, that is because I am. I said in a previous post that I would try to get back to describing lunch in Morteau – well here it is. (By the way, there is another lunch description coming.) 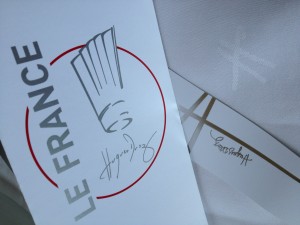 This hotel was nicely branded.

This was a lunch that you would have had to pay a lot of money for – it was over the top. The restaurant was called La France – it was in the village where we saw the watch keys and was originally started by the man who owned the watch keys, Yves Droz, but was now run by his daughter in law. 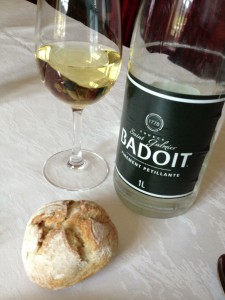 We started out with the wine and bread – it was kind of funny that the waitress that brought out the bread just placed it on the table cloth. I think you will see that on some of the pictures. 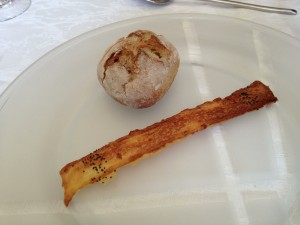 The appetizer looks like a strip of bacon but it was actually a thin bread stick. 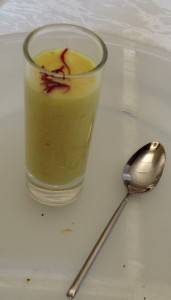 Second half of the appetizer.

After that came two appetizers, one was a piece of thin bread stick, slightly salty but good. The second was a warm squash purée with a beet garnish – very good. 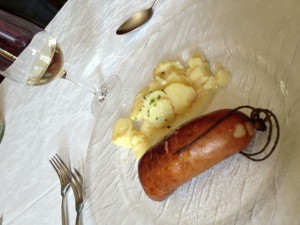 The first course was probably enough for a whole meal.

Next we got into the first course which was a very good, sausage and potatoes – heavy enough to have made up the whole meal. These were very good; the sausage was not strangely spicy, just good and meaty, the potatoes were a little like au gratin. 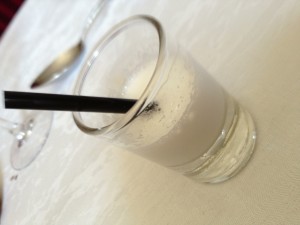 Then came the palette cleanser – not sure I have ever had one of these before as an intentional part of a meal but it was good – kind of like a milky drink. I am not sure that it helped me enjoy the meal any more than of I had not had it – the people who feel this kind of thing is important must have awfully fine palettes, or they are as crazy as clock people who can spend a long time just watching an escape wheel go around. 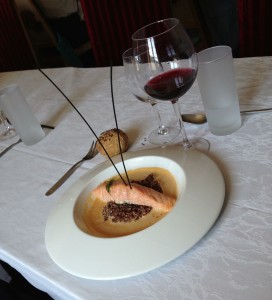 The main course was salmon with red quinoa Ina lobster sauce. This tasted way better than it sounded to me. I expected something heavy and overpowered with lobster flavor but it wasn’t – it was perfect and the portion size was smallish which was a good thing given how much else was in the meal. 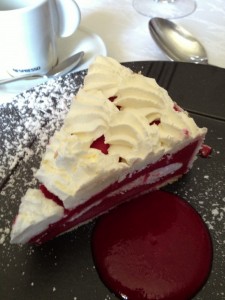 This was much lighter than it looks.

And then to dessert, which like the appetizer came in two parts. The main part was a layered raspberry and pine tree ice with creme topping. I am not sure about the pine tree ice because what seemed to be the frozen part was the creme – not at all what I expected. This was surprisingly light – it looks pretty heavy but was very delightful – I didn’t have any trouble downing the whole thing. 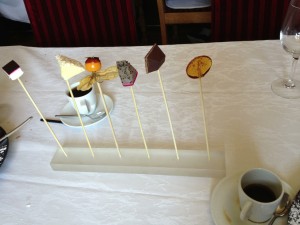 The second part of dessert was a selection of little sweets. We didn’t get a whole tray for each person – just selected something interesting to us. I actually had two – one was a marshmallow type of thing and the other like a caramelized sugar lollipop.

This was probably my favorite meal of the whole trip – and we had some excellent food. More on the way –