I suppose that many of you, especially the clocky types, have been wondering exactly what I have been doing at school.  I have shared a couple of the small projects that we have been assigned to help learn some of the skills of making parts for clocks, but a few weeks ago I got my first “project” clock – actually it was only the movement of a clock; the case has been lost somehow. My assignment was to write a condition report on the clock.  Fairly forward but harder than you think because it needs to be very detailed and part by part. 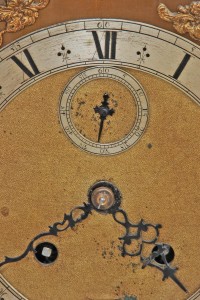 The clock I was assigned was interesting because it was from a rather famous maker, about 300 years old and previously undiscovered – most clocks by well known makers that still exist are known about – this one has been hidden away in an attic for sometime, probably because it somehow got separated from its case.  I can’t say who the maker was because that may get the wrong kind of people interested in doing the wrong thing with this clock.  The clock has had some modifications and is missing the date function that it originally had.  An unscrupulous person may fix it up, add a case and try to sell it as an original. 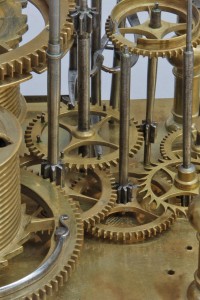 I was able to put this back together without the use of photos or diagrams.

The core of the assignment was to take it apart, examine and take detailed photos of every part (I took 291 photos).  Then, write up what I found.  My report is not quite done yet but I am up to 42 pages with 33 photos included.  Part of my assignment was also to do some research to determine parts that are likely or not to be original to the clock.  This meant several hours of research in the wonderful West Dean library – they have just about every clock book that has been written.

I won’t go through the details but I will leave you with some photos of the clock. 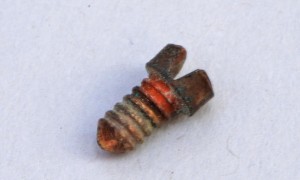 A lovely old, original screw – noticed the “V” groove and the rounded threads made with a screw plate. 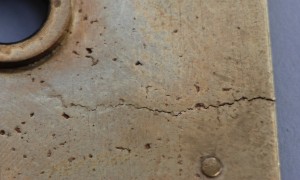 A nasty crack in the cast brass plates that were hammered and smoothed by hand. 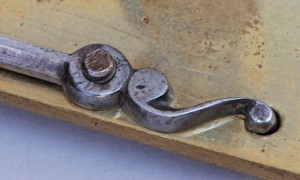