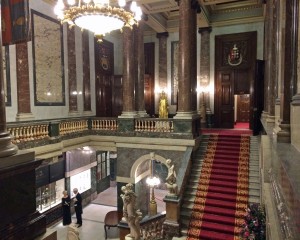 The grand entry to the Goldsmiths Hall.

Probably one of the most memorable events of this England adventure for us will be the Clockmakers Livery Dinner that Debbie and I attended this week.  At the Pasadena Symposium that I helped organize last September, I was invited to become a member of the Worshipful Company of Clockmakers.  This Company is one of the oldest Guilds in the City of London, having been established by Royal decree in 1631.  In September, just after I arrived in the UK, I was formally admitted to the Company.  Sadly Debbie had not made it over yet, so she missed it.
We thought that we might miss this dinner, which is the most formal of the year because I didn’t get my reservation request in soon enough.  However, about a month ago my friend, Will Andrewes, who was the visionary for the Pasadena Symposium, invited us to come as his guest.  I was so excited to get this opportunity because I had heard about it from Will’s wife Cathy. 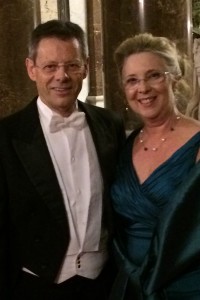 The dinner was held at the Goldsmith’s Hall, the current version of which was built in 1835 and survived the 1st World War with just minor exterior damage to one corner.  The purpose of the dinner is more or less a year end celebration for the company and giving out of some awards.

Being a formal dinner, it was white tie for the men (a first for me) and evening gowns for the women.  Prior to the reception there was a clock exhibition, surprisingly many of the same clocks that were part of the exhibition in Pasadena.  It was fun to see them again.  After the exhibition the evening began with formal introductions; each person or couple is announced (with loud voice) to the Master of the company and a few of the board.  The reception was champagne or orange juice and mingling.  We met the Director of the Royal Maritime Museum, Greenwich and his wife – they were very friendly. 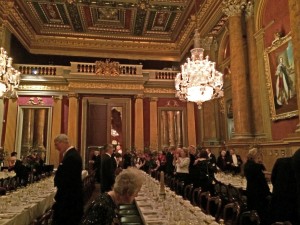 After the reception we went in the Livery Hall for dinner – a huge room, decked out with columns and gold leaf everywhere.  A really interesting part of the hall is that the chandeliers were all lit with 48 real candles and supplied all the light in the room for the evening. 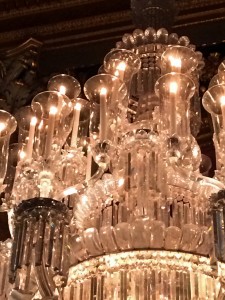 Real candles in the chandelier. 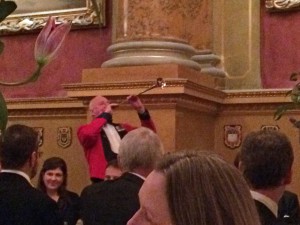 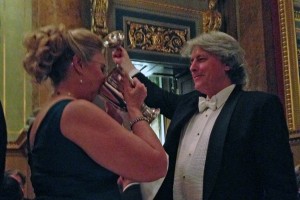 In addition to the excellent four course dinner and all the silver to go with it, there was a musical interlude of trumpeters and a “Ceremony of the Loving Cup”, where a large silver cup of spiced wine was passed around for everyone to take a sip.  But the passing was done in a very ceremonious fashion with the one person taking off the lid, one drinking, and another “protecting” the two whilst the drinking took place.  This is said to have originated more than 1000 years ago – the protector is present so that the person who drinks may be assured of no treachery, such as that practiced by Elfrida on the unsuspecting King Edward the Martyr, who was slain while drinking at Corfe Castle.  The ceremony is interspersed with numerous bows.  I am not sure we did it right but none the less it was unique and enjoyable.  After the ceremony, there was a few introductions and speeches and then the evening was done.

We spent the evening at a nice hotel near the Tower of London and woke the next morning for a short walk around the tower to see what remained of the poppy display and see a few of the sights of London. 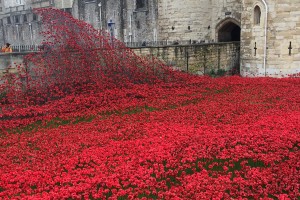 In memory of the fallen soldiers of WWI. 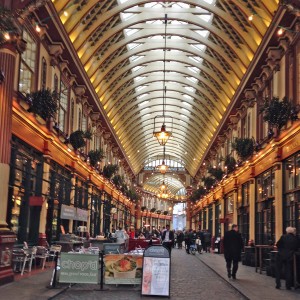 Leandenhall Market dates back to 1881.

The trip home was fun too – it’s nice to watch the English countryside fly by – castles and all.  We’ll remember this for a long time!

Arundel Castle – looks like the battles are still raging.