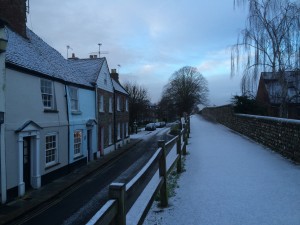 We woke up to snow this week outside our house.

It has been quite a time since I posted something on the blog – I apologize, but things have gotten quite busy at school.  Next week is our mid-term assessments, meaning we get a mid-term grade.  We had writing assignments  for science class and I have been trying get make some progress on my Masters paper.  There are outside people that come in and check on us as well as our own instructors (called tutors here).  I am doing fine–probably around a B+.  Certainly one of the biggest challenges here is managing the priorities of all the different things that are required to do. 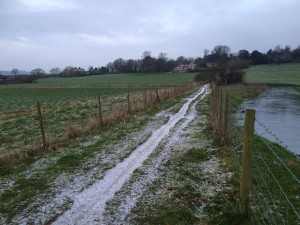 The bike trail on the way to school was white.

We had some snow this week for the first time–not enough to stick for any length of time but it was fun to see it come down.  Apart from the snow the weather has been quite cold–below 40 degrees.

I had the below written for some time–it is going back to our Christmas break- have fun.

Continuing with a few more bits about our trip to the southwest of England.  After Swanage we moved further west along the South coast.  We headed first a bit North to Hinton Martell to see a clock buddy, Chris McKay.  Chris was a speaker at the Time Symposium in Pasadena last November.  He is also the best known, perhaps the most knowledgeable turret clock guy in the world. He has recently published a book about Big Ben that is the most complete book on that topic ever written.  He is also Chairman of the Dorset Clock Society; a group to which he has invited me to speak in March.  I will be talking about the tower clock work at the Santa Barbara county courthouse (of course).

We then moved on west to Dartmouth but not without a little mishap on the way.  Somewhere between there and here the car engine just stopped.  We unfortunately did not have enough space on the side of the road to roll off so we got out and pushed to a larger space off the other side of the road.  It would not start and there was a significant smell of fuel.  I looked at the engine and was fortunate enough to notice around the carburetor that the fuel hose had fallen off.  I popped it back on and we were off again – whew! 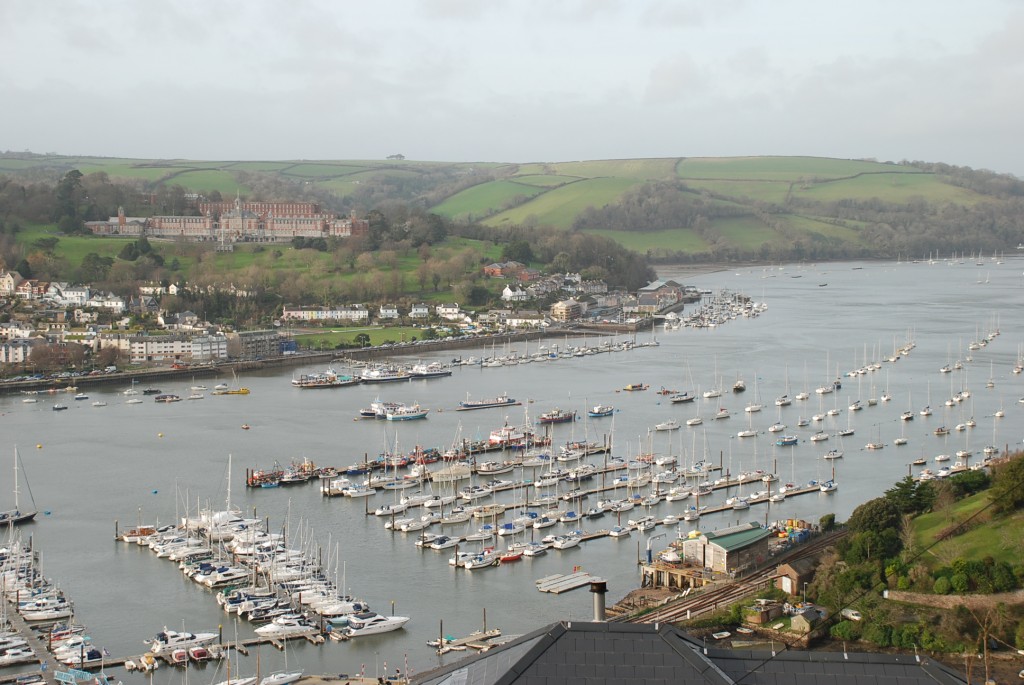 Dartmouth is a big sailing center–in fact you can see the Royal Naval College in the background of this photo. 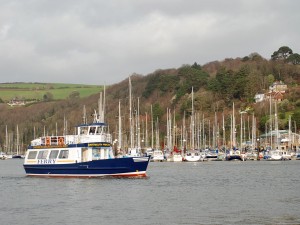 The passenger ferry between Dartmouth and Portswear.

We finally arrived in Dartmouth to rain and a pretty stiff wind.  It was hard to find our B&B in the dark and there was not much space to park on the steep hill, so getting out to look around was more than trivial.  We finally found it–it was lovely and a very inviting place to come out of the rain.  After settling in for a bit, we did venture out to find a bite to eat.  Our B&B was actually on the East side of the river Dart, called Portswear.  Dartmouth itself is on the West side of the river and has all the shops, restaurants, etc.  To get across the river there are two ferries, one is just for pedestrians and the other carries both cars and pedestrians.  The ferries are a quite nice part of the feature of the town and very convenient for a a short five minute crossing. 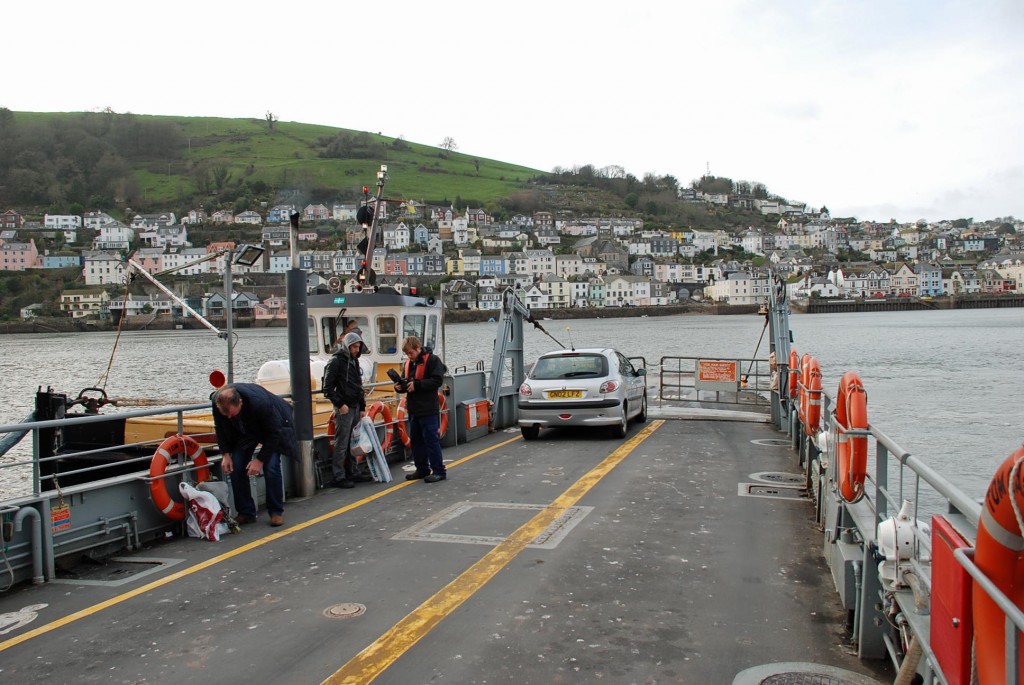 The car ferry is a kick! A small tug ties itself to the barge and that’s it.  I think we were the only car on this trip.

Next morning we woke up to beautiful views of the river and Dartmouth on the other side – albeit cloudy and quite a good wind. 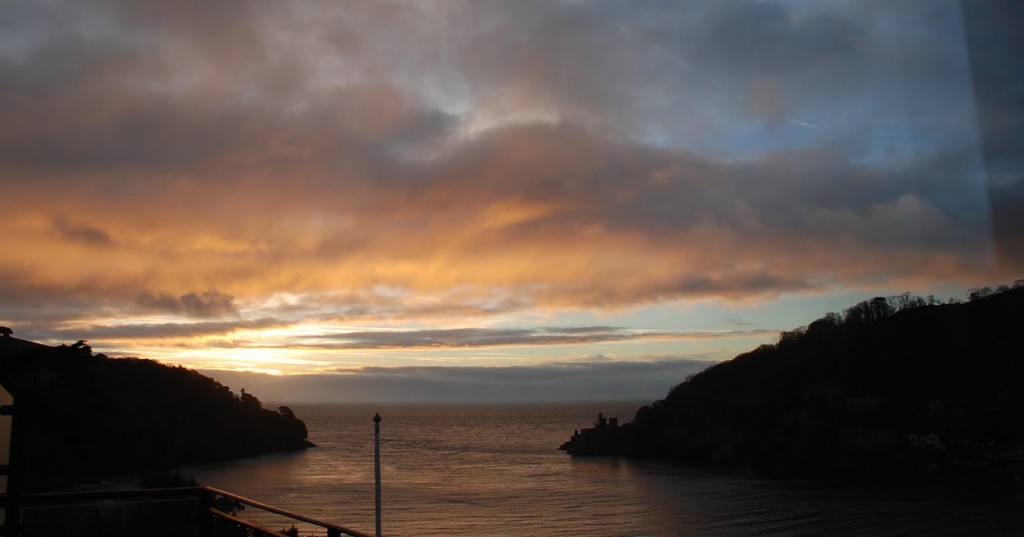 The weather has not held us back though – many of the more famous places, like Greenway, the home of Agatha Christie, are closed for the holidays – so we went to visit Colton Fishacre.  This is the country home of a the D’Oyly Carte family built in the 1920s.  Rupert inherited an opera company as well as the Savoy Hotel and Theatre company from his mother-in-law.  They created an amazing garden that has many plants brought from various parts of the world – looks like it could have been a garden in Santa Barbara.  Also a very nice house that has been preserved as it was in it’s heyday and now kept by the National Trust. 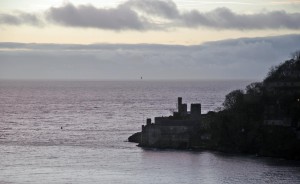 Dartmouth castle from our B&B.

Then we visited the Dartmouth Castle – a small fortress built in 1388 originally to protect the town.  It is accompanied by Kingswear Castle on the other side of the river mouth.  At the time of building, the range of a cannon was too short to protect the whole channel.

Dartmouth is an interesting town with a lot of history – interesting connections to WWII and lots of seaside and sailing focus.  We would both recommend this as a holiday destination.

Tomorrow we are off again for points further west in Cornwall.

Sorry this post is out of order but there it is – hopefully it won’t take so long for me to get to the next one.